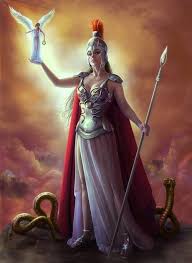 Appearance: Athena was a tall, slim woman with blue-green eyes that always wore a suit of armour and a golden helmet.

Personality: Athena was the embodiment of reason, wisdom and purity. She was always fierce in battle, and she was also Zeus’ favourite child. He always let her use his weapons and thunderbolts.

Roles and Responsibilities: Athena taught mankind sewing and weaving, while she taught the women agriculture and metallurgy to men.

Goddess of: Wisdom and military victory.

Power: Athena was able to fight very ferociously in battle, and many people think their wars were won because of Athena. Her defence of Athens was her strongest power.

Parents: Zeus was Athena’s father and Metis was her mother.

Siblings: Athena didn’t have any real siblings, but had many half-siblings. They were: Hermes, Dionysus, Aphrodite, Ares, Hephaestus, Persephone, Artemis and Apollo.

Children: Athena never had any children.