The Minotaur was the son of Pasiphae, wife of King Minos of Crete.
According to the myth, Minos was imprisoning his enemies in the Labyrinth so that the Minotaur could eat them. The labyrinth was such a complicated construction that no one could ever find the way out alive. Queen Pasiphae slept with a bull sent by Zeus, and gave birth to Minotaur, a creature half man – half bull. King Minos was embarrassed, but did not want to kill the Minotaur, so he hid the monster in the Labyrinth constructed by Daedalus at the Minoan Palace of Knossos. 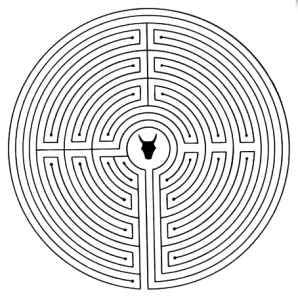 Son of Minos, Androgeus, went to Athens to participate to the Panathenaic Games, but he was killed during the Marathon by the bull that impregnated his mother Pasiphae. Minos was infuriated, and demanded Aegeus the king of Athens to send seven men and women every year to the Minotaur to advert the plague caused by the death of Androgeus.

The third year, Theseus, son of Aegeus decided to be one of the seven young men that would go to Crete, in order to kill the Minotaur and end the human sacrifices to the monster. King Aegeus tried to make him change his mind but Theseus was determined to slay the Minotaur.

Theseus promised his father that he would put up white sails coming back from Crete, allowing him to know in advance that he was coming back alive. The boat would return with the black sails if Theseus was killed.

Theseus announced to King Minos that he was going to kill the Monster, but Minos knew that even if he did manage to kill the Minotaur, Theseus would never be able to exit the Labyrinth.

Theseus met Princess Ariadne, daughter of King Minos, who fell madly in love with him and decided to help Theseus. She gave him a thread and told him to unravel it as he would penetrate deeper and deeper into the Labyrinth, so that he knows the way out when he kills the monster.

Theseus followed her suggestion and entered the labyrinth with the thread. Theseus managed to kill the Minotaur and save the Athenians, and with Ariadne’s thread he managed to retrace his way out.

Theseus took Princess Ariadne with him and left Crete sailing happily back to Athens. 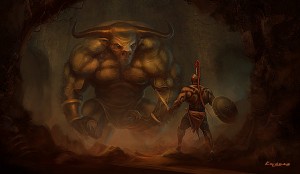 Theseus’ boat stopped at Naxos and the Athenians had a long celebration dedicated to Theseus and Ariadne. After long hours of feasting and drinking, Ariadne fell asleep on the shore and didn’t enter the boat that sailed to Athens. Theseus figured out that Ariadne was not with them when it was too late and he was so upset that he forgot the promise made to his father and did not change the sails.

NOTE: A different version of the myth mentions that Theseus deliberately left Ariadne on Naxos.

King Aegeus was waiting at Cape Sounion to see the sails of the boat. He saw the black sails from afar and presumed his son was dead. He dropped himself to the waters, committing suicide and since then, this sea is called the Aegean Sea.

(2015). In The myth of Theseus and the Minotaur . Retrieved from http://www.greekmyths-greekmythology.com/myth-of-theseus-and-minotaur/