The ancient city of Troy.

A long time ago, there was an ancient city-state on the coast of Turkey, across the sea from Sparta. This city-state was named Troy. At one time, Troy and the other Greek city-states were pretty good friends. But times had changed.

The city of Troy was protected by a high wall built around the city. Some parts of the wall were 20 feet high! There were gates in the wall to let people in and out but it provided great defense for the people of Troy. It gave the Trojan warriors a relatively safe place to stand, while they rained arrows down on the people below, who were trying to break into the city.

The Greek warriors had been trying to breach the wall around Troy for about ten years. The Greeks could not find a way in, and the Trojans did not seem able to drive the Greeks away.

Odysseus, a Greek general, had an idea. His plan was to build a horse, a beautiful and huge wooden horse, and leave it outside the gate. Then, the entire Greek army would pretend to leave, as if they had finally admitted defeat. But the horse would be hollow. Thirty men would be hiding inside. That’s what they did. 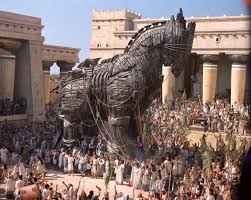 As the Greek warriors sailed away, the people of Troy rushed outside, cheering. They found the horse. Fortunately, they did not try to burn the horse. They dragged the horse inside the city gates to keep it on display, which is just what the Greek general thought they would do – gloat.

That night, while the Trojan people were sleeping, the men hiding inside the wooden horse climbed out and opened the gates. The waiting Greek army entered Troy. That was the end of Troy.