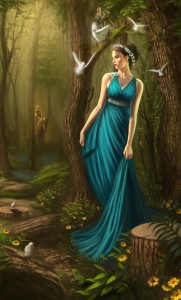 It was a beautiful day like all the others in this land, the sun shone brightly in the sky, the hills were lush and green, and flowers blossomed from the earth. The lovely young maiden, Persephone, frolicked with her friends upon the hillside, as her mother Demeter sat near by, and her father Zeus peered down from the sky above. Laughter could be heard in between the young girls’ whispered secrets, as they gathered handfuls of purple crocuses, royal blue irises and sweet-smelling hyacinths. Persephone thought to bring some to her mother, but was soon distracted by a vision of the most enchanting flower she had ever seen. It was a narcissus, the exact flower her father hoped that she would find.  As she reached down to pluck it from its resting place, her feet began to tremble and the earth was split in two. Life for Persephone would never be the same again.

From this gaping crevice in the ground emerged the awe-inspiring God of the Underworld, Hades, and before Persephone could even think to utter a word, she was whisked off her feet onto the God’s golden chariot. As the crack of the whip upon his majestic horses brought her to her senses, she realized she was about to taken into the black depths from which he’d come. The thought of this brought terror to her heart, yet any screams of protest were soon lost within the darkness, as they descended quickly into the Underworld below.

While Persephone’s cries could not be heard above the ground, the pain in Demeter’s heart quickly alerted her to the fact that something was terribly wrong. She searched high and low for her dear daughter, who had vanished from both the heavens and the earth. Consumed by depression over the loss of her child, she soon ceased to remember her worldly duties as Goddess of Grain and Growth. As she watched the plants wither and die all around her, she felt her own hopes begin to fade as well. 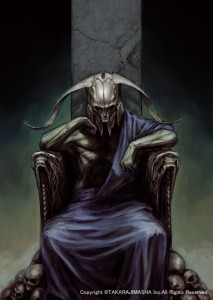 At the same time, deep down in the realm of the dead, Hades hoped to explain his actions to the sweet Persephone. Professing his love, he told her of the plan her father helped deploy and begged her to stay and be his wife. Yet, Persephone longed for something more, the comforts of her mother’s home and a view of the lush green grass and blue sky up above.

Far above the darkness of the Underworld, her mother continued to wander the forlorn earth. Eventually she found her way to the town of Eleusis, where she rested by a flowing fountain. Stripped of all her vital energy, she appeared old and wrinkled beyond her years. Soon four young females found the aging Goddess, and agreed to take her home. Their parents were glad to offer the elderly woman lodging and a stable position caring for their little son. Wishing to reward the family for their kindness, Demeter attempted to offer the child the gift of immortality, by sticking him in the fire each night and removing him every morning before dawn. When the child’s mother found him in the flames, she was horrified. Her mortal mind could not comprehend the actions of the Goddess, and she asked her to leave their home at once. This immediately brought back Demeter’s fighting spirit, who surprised them by exposing her true self. The family begged the Goddess for forgive them and in return agreed to her demands: “A temple would be built in my honor, and you will teach the world my secret to immortality.” Within no time, the town built a beautiful temple on the hillside, which the Goddess blessed before continuing on her journey.

Yet it didn’t take long for Demeter’s happiness to be replaced with rage, as she recalled the disappearance of her daughter. She flew to the home of Zeus and demanded that Persephone be found at once. She also questioned every immortal she could find and eventually uncovered Zeus’ plot. In an attempt to appease Demeter’s growing anger, he dispatched a messenger to retrieve their daughter from the depths.

Upon his entry to the Underworld, the messenger Hermes was amazed at what he found. Instead of finding a frail and fearful Persephone, he found a radiant and striking Queen of the Dead. She had adjusted well to her new position, saying she had even found her calling. The Goddess was now in charge of greeting the new arrivals and helping them adapt to their new life. While she wished to see her mother up above, she was torn by her desire to remain Hades’ wife. 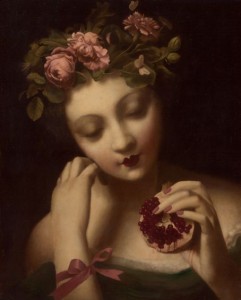 Persephone about to eat the pomegranate seeds.

Hoping to comfort Persephone in her confusion, Hades came to his Queen’s side. He gently kissed her forehead and urged her, “Do not fret, eat instead from this fruit I know you will like.” As she pressed the red pomegranate seeds to her lips, she listened to his words. He told her he would miss her very much, but her duties as a daughter mattered too. So, she climbed into the chariot and bid her husband farewell, as Hermes sped them off to the middle realm of mother earth, the home of her devoted mother.

The flowers sang joyfully of her return, while her mother beamed with pride. Yet, the child that she had born and raised had changed while she was gone. She had grown into a goddess, one both beautiful and wise and the more that Demeter inquired about her experiences below, the more she came to worry that the life they knew was gone. She recalled a declaration Zeus had made from the heavens up above: in order for Persephone to return to the home and life she had known, the young goddess must be as pure as the day she left her mother’s side. However, the ruby stain upon her lips spoke of the beauty’s fate. Persephone had tasted of the fruit of life. It could not be erased.

Even so, Zeus loved his daughter too much to send her back to Hades without the hope of returning to her mother’s abode above. So, each spring Persephone comes back with the flowers that pave her way, to tell the story of rebirth, hope and harmony. And each fall when she leaves again for the Underworld below, her mother mourns and winter comes, while she waits for her return. Yet, for Persephone there is no remorse. She looks forward to the time she spends as Hades’ Queen and wife, and to guiding those who have lost their way to the next phase of their life.

Strong, L. (2001). In The Myth of Persephone – Greek Goddesses of the Underworld. Retrieved from http://www.mythicarts.com/writing/Persephone.html