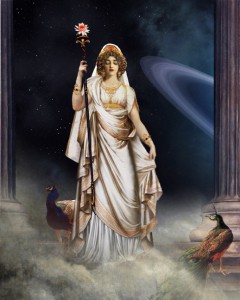 Appearance: Hera was a beautiful, fair and mature women with big eyes. She always dressed elegantly and took great care of her appearance. However, she was not desired by gods, and had to use Aphrodite’s girdle to attract Zeus.

Personality: Hera got jealous quickly, but this was mostly due to Zeus. He had many affairs with other goddesses, so she could never trust him and was always inflicting harm on his mistresses. Hera was not very just, and because of this she made rash decisions that were often influenced by her emotions.

Roles and Responsibilities: Hera was the queen of Mount Olympus, and ruled alongside Zeus. She was very protective of women and presided over marriages and birth.

Goddess of: Marriage and birth.

Power: Hera had the ability to bless and curse marriages, as well as save women from death during childbirth. She also helped preserve the health of women altogether.

Siblings: Hera had two sisters and three brothers. Her brothers were Zeus, Hades and Poseidon, while her sisters were Demeter and Hestia.

Husband: Hera was married to Zeus, who was also her brother.

Children: The two famous children she had with Zeus were Ares and Hephaestus.