A statue of Pandora.

Pandora was, according to the myth, the first woman on Earth. She was created by Gods; each one of them gave her a gift, thus, her name in Greek means “the one who bears all gifts”.

Pandora was created as a punishment to the mankind; Zeus wanted to punish people because Prometheus stole the fire to give it to them. Her gifts were beautifully evil, according to Hesiod. Hephaestus created her from clay, shaping her perfectly, Aphrodite gave her femininity and Athena taught her crafts. Hermes was ordered by Zeus to teach her to be deceitful, stubborn and curious. 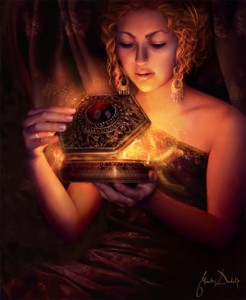 Pandora was given a box or a jar, called “pithos” in Greek. Gods told her that the box contained special gifts from them but she was not allowed to open the box ever. Then Hermes took her to Epimetheus, brother of Prometheus, to be his wife. Prometheus had advised Epimetheus not to accept anything from the Gods, but he saw Pandora and was astonished by her beauty, thus he accepted her right away.

Pandora was trying to tame her curiosity, but at the end she could not hold herself anymore; she opened the box and all the illnesses and hardships that gods had hidden in the box started coming out. Pandora was scared, because she saw all the evil spirits coming out and tried to close the box as fast as possible, closing Hope inside.

According to Hesiod Hope indeed stayed inside because that was Zeus’ will; he wanted to let people suffer in order to understand that they should not disobey their gods. Pandora was the right person to do it, because she was curious enough, but not malicious.

(2015). In Pandora’s box the Greek myth of Pandora and her box. Retrieved from http://www.greekmyths-greekmythology.com/pandoras-box-myth/

*See the Bibliography for the pictures cites.