Greek mythology existed a long time ago, so it doesn’t seem very relevant to us today. However, to the Greeks, mythology was very important and a lot of their decisions were based on what they thought the gods wanted. 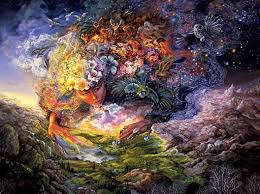 The creation of the earth as told by Greek mythology.

The main reason why mythology was so popular was because it explained important events in history that they didn’t know how to explain. For example, the creation of the Earth, the weather, the seasons, etc. Instead, they used the Greek gods and goddesses as an explanation. If it was raining or stormy it was because Zeus was mad. The seasons changed because of Demeter’s mood. Everything was based off the gods, and it gave them a way to understand what was happening. Myths also were interesting to listen to, and many children enjoyed them as entertainment. It was easier for parents if they told their children to behave or else the gods would punish them, because the children would think twice about misbehaving or doing something wrong. 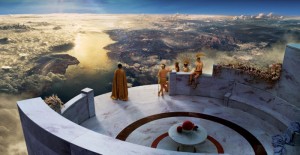 The gods on Mount Olympus watching over the world.

The Greek gods also gave them a sense of security, in that the Greek gods were always watching over them. It gave them something to believe in when times were tough. Today we have so many technological advancements that we have figured out what the Greeks couldn’t, and found explanations for all the important events in history. We now know that the seasons, the weather, and whether its day or night depends on the Earth’s rotation and its orbit around the sun. Things like how the Earth was made however are still mysteries, and ones that still puzzle scientists all over the world.