Appearance: Hermes always wore travelling clothes, winged sandals, a winged hat, and carried a staff so he had access everywhere.

Personality: Hermes was a graceful yet cunning figure. He was a good liar and also very sneaky, he had an impulse to steal from the moment he was born.

Roles and Responsibilities: Hermes was a messenger, and was the only god permitted to travel to Earth, the Underworld and Heaven. He did a lot of jobs for Zeus, especially when it came to Hera.

God of: Hermes was just the messenger, and therefore wasn’t the god of any specific element.

Power: Hermes had winged shoes, which allowed him to be the fastest god on Mount Olympus. 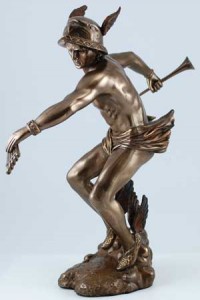 Parents: Hermes’ mother was Maia, and his father was Zeus.

Siblings: He did not have any siblings that were directly related to him, however he had many half siblings. They were: Athena, Dionysus, Aphrodite, Ares, Hephaestus, Persephone, Artemis and Apollo.

Wife: He did not have a wife, but he had many lovers with all different goddesses and nymphs.

Children: He had numerous children, but the most famous ones are: Hermaphroditus and the Satyr Pan.