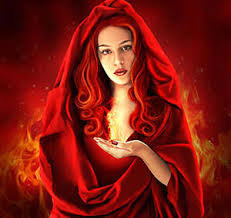 Appearance: Hestia was usually seated in pictures, and she was very bashful. She always dressed very modestly and she was seen wearing a veil most of the time.

Personality: Hestia was a kind, forgiving goddess and had a discrete character. She never left Mount Olympus and was never involved in any disputes or wars, so she was well-respected and loved by everyone.

Roles and Responsibilities: Hestia was worshipped by all, and she was in charge of keeping the fires alive in the homes of families. She was the reason that the Olympic torch was made, as it was feared that if the fire went out it would bring a life cold and barren in Greek times.

Power: Hestia was able to keep families warm using fire, and it was believed that her fire was the centre of the Earth.

Siblings: Hestia was the eldest in her family, with three brothers and two sisters. Zeus, Poseidon and Hades were her brothers, while Hera and Demeter were her sisters.

Husband: Both Poseidon and Apollo wished to marry her, however she denied both and never married anyone.