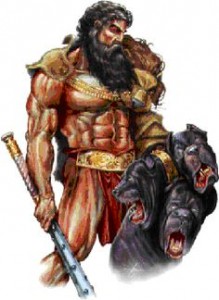 Appearance: Hades was a dark and gloomy god, and he looked that way too. He had long dark hair and a beard that covered most of his facial features.

Personality: Hades was not well liked, and that was mostly due to his morbid personality and the joy he had when people got the punishment of death for their crimes. He didn’t interact much with other gods, and he loved being feared. However, he was one of the most just gods out of all of them.

Roles and Responsibilities: Hades did not live on Mount Olympus with most of the other gods, instead he enjoyed his dark and gloomy kingdom in the Underworld. He was in charge of all the dead souls of mortals and immortals.

God of: Death and the Underworld.

Power: His helmet that he wore could turn him invisible, so not many people knew when he left the Underworld.

Siblings: Hades had two brothers and three sisters. Zeus and Poseidon were his brothers and Hestia, Hera and Demeter were his sisters.

Wife: Hades married Persephone after he abducted her and tricked her into eating a few pomegranate seeds, which would mean she could never leave. Unfortunately for him, it didn’t work and she only had to live with him for six months a year.

Children: He did not have any children.