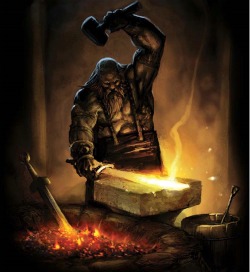 Appearance: Hephaestus was very ugly and deformed. When he was younger, Hera was so disgusted by him that she threw him off Mount Olympus. He was then rescued and raised elsewhere, but received a deformed leg after the incident.

Personality: Despite his appearance, Hephaestus was a very kind and lovable god. He was very friendly and peaceful, and loved working. However, he was the jealous type, and could be quite bitter about how the other gods treated him.

Roles and Responsibilities: His responsibility as a god was to make weapons for the other gods and goddesses on Mount Olympus as he was a very skilled blacksmith and craftsman.

Power: Hephaestus could withstand high temperatures because he was a blacksmith, and he could construct anything he wanted.

Siblings: Ares was his only real  brother, however he had many half siblings. They were: Athena, Hermes, Dionysus, Aphrodite, Persephone, Artemis and Apollo.

Wife: Hephaestus was married to Aphrodite.

Children: He did not have any children.