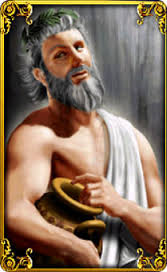 Appearance: Dionysus was described as a very handsome man with a wreath of ivy on his head. He was usually seen holding a thyrsos, which was a light staff wrapped with ivy and had a pine cone on top.

Personality: Dionysus was a very lighthearted god and always offered help to anyone in need. Although he often brought joy to the world, he could also occasionally bring brutal and blinding rage.

Roles and Responsibilities: Dionysus created wine and also spread the art of viticulture. He was highly associated with rebirth, as he was killed by Hera and then brought back to life by Rhea. He was well like by mortals, and many festivals were held in his honour.

God of: Fertility and wine.

Power: He had no known powers, except that he helped with the growing of crops and nature. 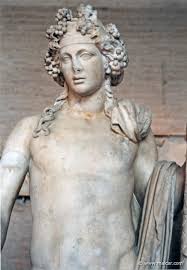 Siblings: Dionysus had no real siblings, but many half siblings. They were: Athena, Hermes, Aphrodite, Ares, Hephaestus, Persephone, Artemis and Apollo.

Wife: Dionysus was married to Ariadne, the princess of Crete. However, he had relationships with Aphrodite and Nyx as well.