Appearance: Poseidon was always described as imposing and strong with long, blue hair, and was always seen carrying a trident.

Personality: Poseidon was considered the greedy, selfish god among the Olympians. He was very bad-tempered, and always got revenge.

Roles and Responsibilities: Poseidon was in charge of the ocean and all the creatures within it. He lived in the depths of the sea, but also had a throne on Mount Olympus.

God of: The sea, horses and earthquakes.

Power: Poseidon controlled the oceans and seas, and when he was angry the waves were big and dangerous. He used his trident to cause flooding and earthquakes as well. 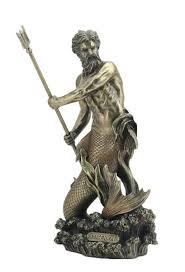 Siblings: Poseidon’s brothers were Zeus and Hades, while his sisters were Hestia, Hera and Demeter.