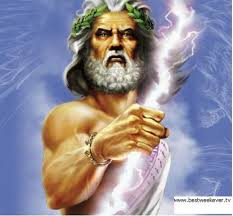 Appearance: His hair was long, often curly and usually white. He was strong and wise, as well as very confident. He was usually portrayed as old, even though immortals do not age.

Personality: Zeus was very wise, just, carefree and loved to laugh. However he was unpredictable, so no one knew what he was going to do or what decision he was going to make.

Roles and Responsibilities: Zeus was the leader of all the gods, and very well respected. He lived on Mount Olympus and had his golden throne on the highest summit. Because he controlled the weather, it always replicated his mood. When he was happy Zeus would bless the mortals with sunny weather, and when he was angry or sad the weather would be rainy and stormy.

God of: The sky and thunder.

Siblings: Zeus was the youngest of his 5 siblings. His two brothers were Hades and Poseidon, and his three sisters were Demeter, Hestia and Hera.

Wife: Zeus married Hera, his own sister, however he had numerous love affairs resulting in plenty of children.

Children: Zeus had a total of 9 children, but only two of them were with his wife. Hephaestus and Ares were with Hera, and Athena, Artemis, Apollo, Hermes, Dionysus, Aphrodite and Persephone were with various other goddesses.